MY SEA LADY
by
Graeme Ogden

An epic memoir of the Arctic convoys

My Sea Lady is the story of HMS Lady Madeleine, an ocean-going trawler converted to an anti-submarine role as part of the convoys to supply the Soviet Union as it faced the savage onslaught of the German army. This was a voyage fraught with storms, ice bergs, and sub-zero temperatures in peacetime alone, but now the convoys faced worse – the fearsome gauntlet of German aircraft, submarines and surface raiders strung out along the coast of Norway, waiting to meet them. Graeme Ogden commanded the vessel in question, keeping diaries of the harrowing experiences of those years, which also cover his time on the equally perilous Atlantic convoys. These accounts were rediscovered and published as a memoir in the 1960s, illustrated with exquisite line drawings by Richard Elsden, who also sailed on these voyages, adding that extra touch of realism.

Any royalties received by the estate in respect of sales will be donated to the Russian Arctic Convoy Museum. 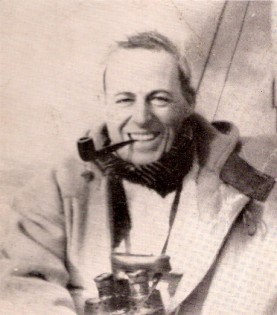 Graeme Ogden, father of Bene Factum author Alan Ogden, was educated at Eton and Trinity College, Cambridge, where he read Architecture. At the beginning of the 1930s, he started Scott Radio, a successful business brought down by the outbreak of war, since most of the employees were German, and subsequently interned. After his remarkable wartime experience, he became a stockbroker and then an entrepreneur involved with a variety of projects, including mining diamonds from the African sea bed, and pelletising sulphur. He died aged 80 in 1983.

Also available as an eBook from Amazon and other e-tailers.